A few months ago, I left the security of my Blackberry Curve to enter the world of the Palm Pre, and this past Thursday I had to go back. Honestly, the Pre is a “good” phone, but it really has some issues that for me I could not look past. From a tiny keyboard, to the slow response times, to the overall ‘buggy issues’ that the operating system had — I just had to return to my Blackberry Curve. Now, the main reason I switched to the Pre was because it had WiFi capability and where we live I can barely send a text without standing outside on one leg holding an antenna in one hand with aluminum foil on my head. Well, let the light shine in because I just read an article today that tells me this is all about to change! 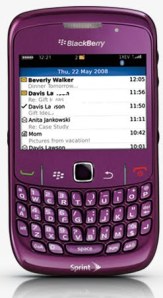 According to the article I read, the “Sprint BlackBerry Curve 8530 was rumored to launch on December 18th, but new information has landed in our inbox indicating that the handset will go live on January 10th of next year (2010). The Curve 8530 will feature the same specs as the 8520, but with the addition of WiFi and BlackBerry 5.0 OS.“

So, let me just say “YAY!” to this new information!! Anyway, that’s all that is new here — have a good night everyone.