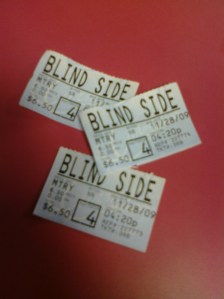 So this afternoon, Lisa, Nicole and I went to see “The Blind Side” and folks, let me tell you that this is the best movie I have seen all year. The entire theater was PACKED, and so was the showing before and there was another line to get in when we left. There is a reason this is doing so well in the theaters, and you need to see it if you have not.

I went from tears to laughing to tears several times throughout, and the acting was just real. It was not fake, it was not pushed, it was just honest and straight forward good entertainment with a tremendous lesson that we need to pay attention to those around us, and when we can reach out to lend a hand.

Now, let me be honest and say that there were a few “situational” areas where some language was present but there were no f-bombs, and absolutely NO nudity — praise the Lord for that! What there was however, was just real life with real situations in the ghetto where one would expect similar types of conversations to occur. However, the main acting of the movie is either done in a Christian school setting or in a home and so the language was non-existent in those areas.

Back on point though, the movie was just first rate and I would recommend it for anyone over the age of 13. Parents, you can feel OK taking your teens to see this movie …. and I would not steer ya wrong. Thanks for reading and thanks for allowing me to promote this film.

3 thoughts on “The Blind Side”