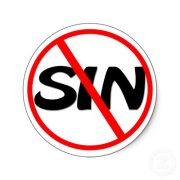 I am a staff writer for the website GotQuestions.org and I received a question that I wanted to share as well as the answer that I provided. The question has to do with “justifying sin by blaming something else” and I believe it is VERY IMPORTANT for believers to know the Bible’s position on this and how we must respond to it.  May God bless you as you continue to provide hope to those you are a witness too.

Question:  Is it true that Hitler would use verses from the bible to justify the killing of Jews. Is it God’s fault that Hitler misinterpreted those verses?

Answer:  Thank you for writing to us. Hitler’s horrendous actions were absolutely no different in the eyes of God than the sin that you and I commit in this: they ALL violate God’s plan for us to live. To attempt to blame God (who is the Creator – see Gen 1:1) for the actions of a human being (who are the created – see Job 40:7-14) is extremely irresponsible and demonstrates our willingness to take the sovereignty of a holy and righteous God and replace Him with ourselves; which is what Satan attempted to do and why he was expelled from Heaven (see Isaiah 14:14).

Hitler’s choices had nothing to do with God’s actions but instead represented his own sinful nature which in turn reflects ours as well. Each time we sin and attempt to blame God or anyone else we are doing EXACTLY what Adam did in the Garden of Even (see Genesis 3:12), which is to deflect blame on someone else and take no responsibility for our own actions.

God is not a God of confusion (see 1 Cor 14:33), of lies, of rebellion, or of excuses but instead He is holy, righteous, and sovereign. It is critical that we do NOT spend our time seeking excuses for our choices (or the decisions of others) but instead repent of our sin and turn to God for everything we need. God bless you.

Servant of Jesus, husband to Michelle, proud dad of three, pastor, political commentator, retired Air Force TSgt, and IT geek. Thank you for stopping by and visiting my blog; I really appreciate it and feel quite honored that you have. Please feel free to drop a comment if you feel led to do so on any postings that are here. May the Lord bless you and your family always. View all posts by Rev TJ Conwell